Horse welfare is our focus

We are a non-profit organisation, committed to providing hope for equines through
education, rehabilitation and advocacy.

April is an 8 year old 8 hh chestnut mare. She has been well handled at some stage in her life, but is still a little wary with some people. Little people appear fine. She travelled with Lux when he was gelded and was the perfect stable mate while he recovered. She is a very sweet pony that just needs to learn to trust again.

Benson is a 12.2hh, 10 year old taffy Australian Pony gelding. He has only recently come into Short Term Care and needs to have his feet trimmed as a priority. Next will be a visit from the Vet to do his teeth, vaccinations and microchipping, as well as a general health check. Benson floated well and is easy to catch and lead. He will pick up his feet and is comfortable with being touched all over his body. His level of training and education is unknown at this stage. 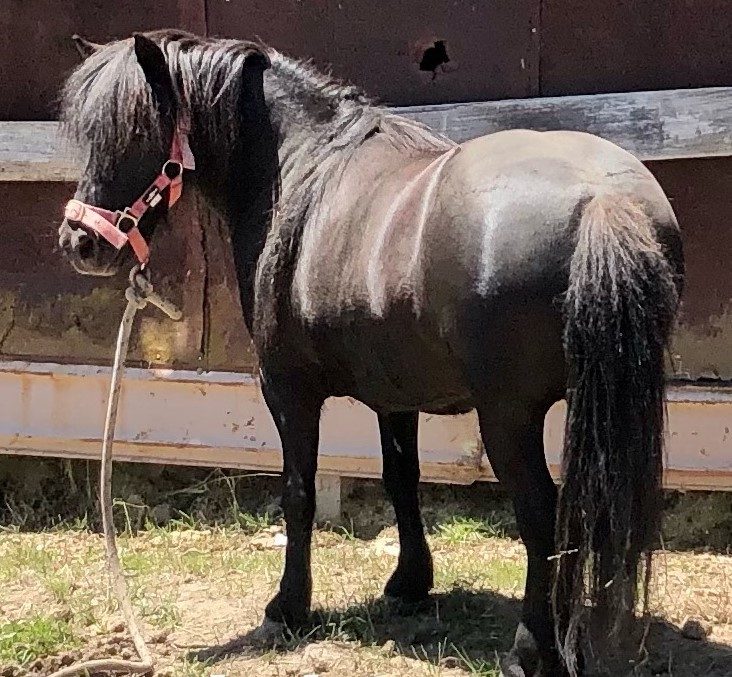 Black Swan is a 7 year old 9 hh black shetland mare. She has had limited handling and is a little tricky to catch. Her current carer is working with her regularly. Black Swan's hooves were very long, as can be seen by the above photo and she is undergoing feet rehabilitation.

Chancey is a 13.2hh, 9 year old bay pony who has recently been gelded. He is very wary when handling his back feet, possibly due to an old injury where there is some scarring on his back leg. He is improving, but still has trust issues. In a short time, he has come a long way and has a bright future ahead.

Friday and Yani are both 9hh, 8 year old Shetland mares. They are having their basic welfare needs attended to and will be looking for a long term home very soon.

Lux is a 9hh, Miniature Palouse pony. He required surgery to be gelded as one testicle had not dropped. . He is recovering well from this procedure and is now receiving farrier and dental treatment. Lux has not had a lot of handling and was in danger of founder, but has come a long way in a short time.

Ollie is a 18 year old Miniature gelding who was suffering bad rain scald and lice, as well as numerous other health ailments. Ollie’s progress has been positive despite very abnormal blood test and a nasty episode of colic which was very worrying. His globulins remain very high in some and low in others. These globulins are important as they give you the insights into what is going on whether tumour, inflammatory or parasitic complications. Further testing on these is being done and awaiting results.

We can be positive it is not parasitic as his egg count came back zero – a successful worming plan has given Ollie a good outcome.

Phoenix is a 15hh brown Stock horse X gelding aged around 5 or 6 years old. He is currently recovering from a leg injury. He is still learning manners and he is responding well to basic training.

Silver is a 28 year old grey Arabian gelding standing at approximately 14.3hh. Sadly, his owner passed and Silver requires some TLC. He is currently in Short Term Care with a PHHWV Member who is tending to his needs including hoof care, worming, vet assessment, dental treatment and a carefully balance diet to improve his condition.

Snag is a chestnut Quarterhorse gelding who had an untreated left eye injury which left him blind and in chronic pain. This eye was recently removed and he is currently recovering. Snag's dental care was also neglected. In spite of his health issues, Snag is a kind and gentle horse.